A small guide to the Kyrgyz Horse - Kyrgyz'What?

A small guide to the Kyrgyz Horse

Like in other nomadic countries, the horse in Kyrgyzstan has a very important place in local life. It used to be the only way to travel in the high mountains of the Tian Shan, the sole companion of many shepherds and an ally in war. The horse is a very important part of the national identity, present in all national games and festivities.

A local idiom says that “horses are the Kyrgyz’s wings”. And a man who does not know how to ride a horse is not a man, they say.

Kyrgyz horses are small but famous for their incredible endurance. Under the Soviet Union the traditional Kyrgyz horse was crossed with foreign breeds to make the horse faster and taller, mostly for purposes of races and games. It is called the New Kyrgyz Horse.

The new Kyrgyz horse measures 160cm approximately and weighs around 450 kilograms. It is used both as a pack horse and for riding.

A little bit of history

The original horse of Kyrgyzstan is very small (up to 140cm) and able to live at very high altitudes. It was very appreciated for its endurance and stamina.

Under the Russian and especially Soviet rule, this horse was crossed with foreign breeds to make a faster and taller horse, but just as resistant and adapted to life in the mountains. The new Kyrgyz horses are the result of crossings between Kyrgyz mares and Arabian stallions mostly.

In Kyrgyzstan, the first national stud farm was created by KC Dimitriev in 1879. He started with only two horses, but in 1896, there were already around 40 horses on the farm. Thirty years of selection and crossbreeding improved the horse, which grew from 1.34 m to 1.64 m average.

In 1956, the new horse was recognized as a race. It is known as the Novokyrgyz, or “new Kyrgyz”. 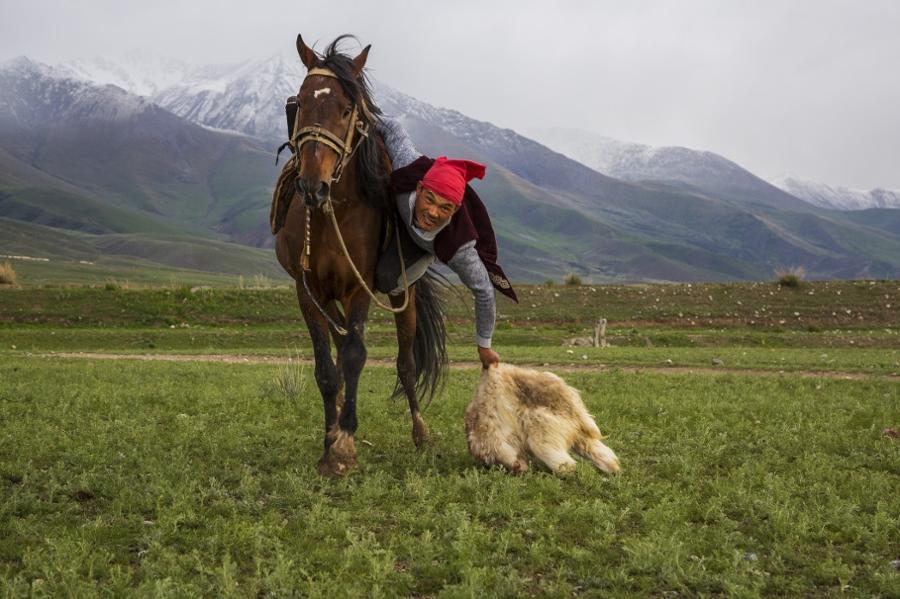 The new Kyrgyz horse is a small horse, pretty large and muscular, strong and with a flat back. It has small ears and eyes, both very mobile. The horses can be of any color, even though the most common are bay, chestnut, gray or brown. They have short hair.

The Kyrgyz horse has four basic gaits: walking, ambling, trotting and galloping. It moves at great ease on harsh terrain and at high altitudes, balancing mostly thanks to its strong neck.

The horses in Kyrgyzstan usually live in semi-freedom outside. In the summer pastures, they roam free for a few days. When shepherds do not want them to go too far, they tie their legs together.

Horses are treated with a lot of respect in Kyrgyzstan. They are very well trained, especially those used in the national games like wrestling or Kok-Boru (buzkachi).

For the Kyrgyz people the horse was and still is very important for transportation. It allowed to travel long distances regardless of the weather conditions and the difficult terrain. It was also used to conquer new territories. The Kyrgyz were always on horse, and still often are today especially in villages. In the wintertime for instance, cars can’t always reach their destination, but horses can.

The Kyrgyz horse is also used for national games like wrestling, racing or Kok-Boru. During your trip in Kyrgyzstan, you’ll be able to go on horse treks and live the real life of nomads, exploring unexplored lands and wild landscapes.