The customs and traditions related to birth in Kyrgyzstan - Kyrgyz'What?

The customs and traditions related to birth in Kyrgyzstan

Modern Kyrgyz are still very attached to their traditions, most of which regulate the important events of family life. In Kyrgyzstan there were a lot of problems linked to a high infant mortality rate: a lot of newborns wouldn’t survive birth or live just a short few days in the harsh conditions of nomad life.

This is why a few Kyrgyz traditions are related to birth, believed to protect the newborns and promise them a long and healthy life.

Before, when a woman gave birth, a "kindik-ene" would come to help make sure everything went well. The kindik-ene wasn’t just a midwife: her role was also to protect the newborn from the evil spirits and the demons.

The midwife was considered to be the reincarnation of the goddess protecting women and young children. She was meant to scare off bad spirits with her spells. After the baby was born, families would offer gifts to the kindik-ene, usually the best meat from mutton or an animal skin.

After birth, Kyrgyz families would organize a celebration called the “dje-entek toi”. Guests were given fresh melted butter, the “sary mai”, which was kept in the stomach of a lamb until the event.

When a baby was born prematurely, he was swaddled in fox fur. The fur was then hung on the wooden frame of the yurt. It was moved around the yurt at intervals of nine months, nine days, nine hours, and nine minutes, 9 representing the normal duration of pregnancy and development. It was only at the end of this procession that the child was considered "fully born", and that the "dje-entek you" could be kept in good and due form. 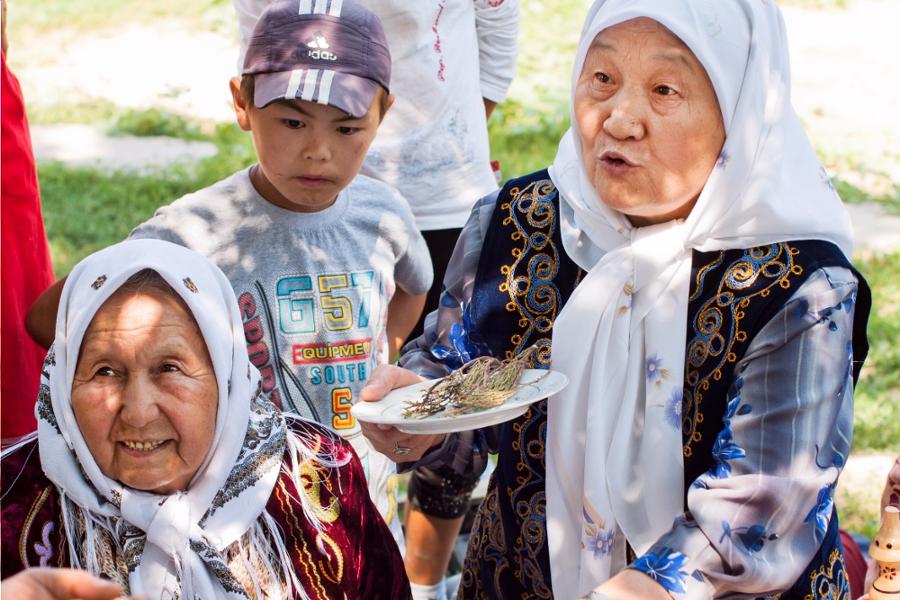 The Beshik toi celebration after birth

Another tradition consisted in wrapping the baby and placing it in a wooden cradle called “beshik” for the first time. Traditionally, the eldest woman in the village or tribe was supposed to do this. This was meant to promise a long life to the child, who would live just as long as the woman.

Presenting the child to the village

After birth, babies were (and still are) usually kept unseen for 40 days. After the end of this period, parents finally showed the newborn to the village, nowadays to their friends and families during a celebration. Traditionally, 40 neighbors were supposed to bring 40 pieces of cloth to the baby so that the family could make clothes for it. Each piece represented a day the baby had lived. They were supposed to be magic and promise happiness and health to the child who wore them. Now, guests usually bring money to the parents during the celebration.

In Kyrgyzstan, a baby’s first steps make for an important celebration. It’s called “tushoo kesuu” and usually looks like this: the baby’s legs are tied with two ropes, a white representing good and a black one representing evil. Guests participate in a few races and the winner has the honor of cutting the ropes around the child’s legs and allowing the baby to walk.

The child mortality rate thankfully has significantly decreased, and ancient customs are being left behind. However, a lot of families still celebrate the 40 days of the child as well as its first steps.

Culture and Tradition
Ksenija Olmer
21 July 2022
Hello, I recently witnessed a ceremony/healing for a new baby in Arslanbob where the baby’s skin was cut with a blade supposedly to help her cry less. Can you tell me any more information about this? I have searched on the internet and not found anything helpful. Thank you.
Reply
Related articles
Six museums you should visit in Kyrgyzstan
A few local beliefs to know before going to Kyrgyzstan
A small guide to the Kyrgyz Horse
Cultural differences to know before going to Kyrgyzstan
Why you should choose Kyrgyzstan for your next vacation
Archives
Tags
Tourism (31)Culture and Tradition (28)Sports (8)Gastronomy (5)Flora and Fauna (4)History (3)Tips and Tricks (3)News (1)Religion (1)