Traveling to the sound of Komuz, the Kyrgyz traditional instrument - Kyrgyz'What?

Traveling to the sound of Komuz, the Kyrgyz traditional instrument

The Kyrgyz have inherited from their nomadic ancestors an important musical tradition. Their music will add magic to your trip in the pastures and summits of Kyrgyzstan. The Komuz, whose name simply means “musical instrument”, is the most famous Kyrgyz instrument.

The Komuz is symbolic of Kyrgyz culture and traditions and even has a holiday dedicated to it, on September 9th. “The Komuz occupies a particular place in traditional culture of the Kyrgyz people,” reads the presidential order that created this holiday in the summer of 2019. “The Komuz melodies, called “kuu”, which carry the philosophical thoughts, the way of life and the culture of the Kyrgyzstan and are passed on from generation to generation, have survived until our days.”

This three-stringed instrument is usually carved in apricot wood, a tree that grows in the Issyk Kul region and in the south of Kyrgyzstan. Played horizontally, this beautiful instrument is around 90 centimeters long. 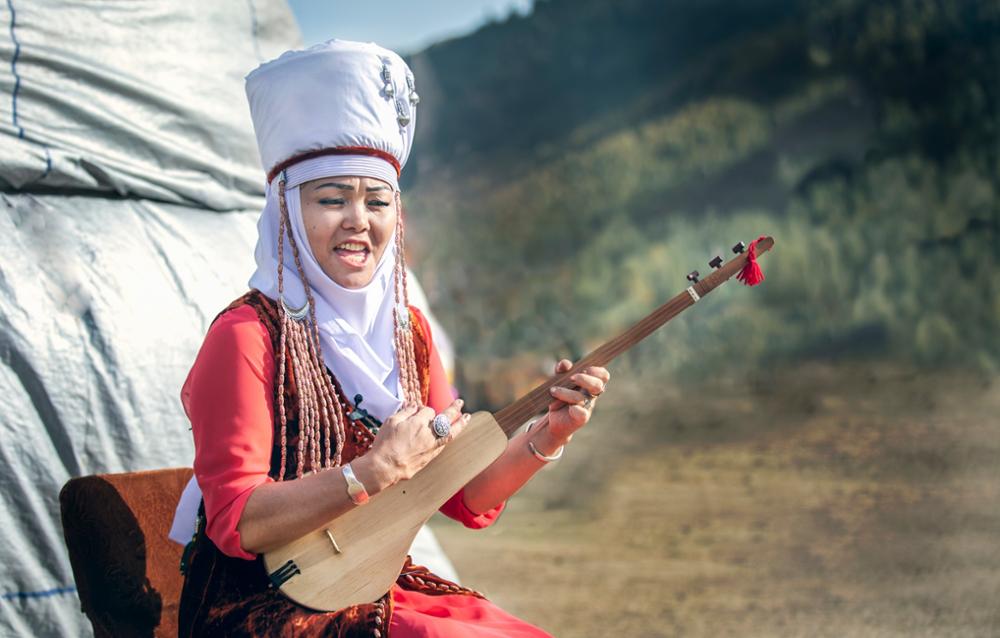 A Kyrgyz legend says that the first Komuz came from a love story. In the mountains near Issyk Kul Lake, a hunter fell in love with a beautiful young woman, clear like the morning dawn and with a charming voice. He was heartbroken, not knowing how to get this girl to love him. Under an apricot tree, where he was sobbing, he heard a surprising sound. He then noticed that the wind was pulling strings attached to the tree; these were actually dried intestines of a goat. That’s when he had the idea of carving an instrument shaped like a tear from this tree, to play the sounds of his pain. And thanks to his Komuz, he conquered the woman’s heart.

Traditional songs, passed from generation to generation, tell the adventures of the Kyrgyz people, talk about love, war, and nomads. Kyrgyz children learn to play Komuz at a young age and perform on stage in traditional clothes, proud of their culture that is still alive today. For the opening of the World Nomad Games in 2016, Kyrgyzstan offered a spectacular show of 1000 Komuz musicians playing the “Mash Botoi”, a vivid melody about nomadic life, camels and horses.

With their national songs, the nomads of Kyrgyzstan left a culture of love for music, legends and history to the modern generations.