The legends around Kyrgyzstan’s most beautiful sites - Kyrgyz'What?

The legends around Kyrgyzstan’s most beautiful sites

There’s nothing better than listening to local legends to get to know the culture and history of a country. Read our article to rediscover some of Kyrgyzstan’s top places through local legends, and keep these in mind when you get to visit these sites!

The Burana tower: to defend a princess

Located in the Chuy region on the road from Bishkek to the Issyk Kul Lake, the Burana tower is among the best attractions in Kyrgyzstan. The tower measures 25 m today but was 20 m higher when it was built, between the 10th and 11th centuries. Nowadays, this historical complex is listed as a UNESCO world heritage site. History books will tell you that this was an important minaret and pilgrimage destination in the Kakhan Empire, but Kyrgyz people tell otherwise…

The local legend says that a powerful king had the tower built to protect his tower. A prophet had told him that his daughter would die at the age of 15 from a spider bite. The king was desperate at the idea of losing his beautiful daughter, and decided to make her live at the top of this tall tower to keep her safe from any danger. When his daughter turned 15, the king was so happy that she was still alive. He brought her a basket of apples to celebrate her birthday. But a spider (a black widow) was hiding in the apples, and when he brought the basket up to his daughter, the spider bit the young girl and she died, as predicted. The king was inconsolable and cried, and the legend says that his tears destroyed the tower. 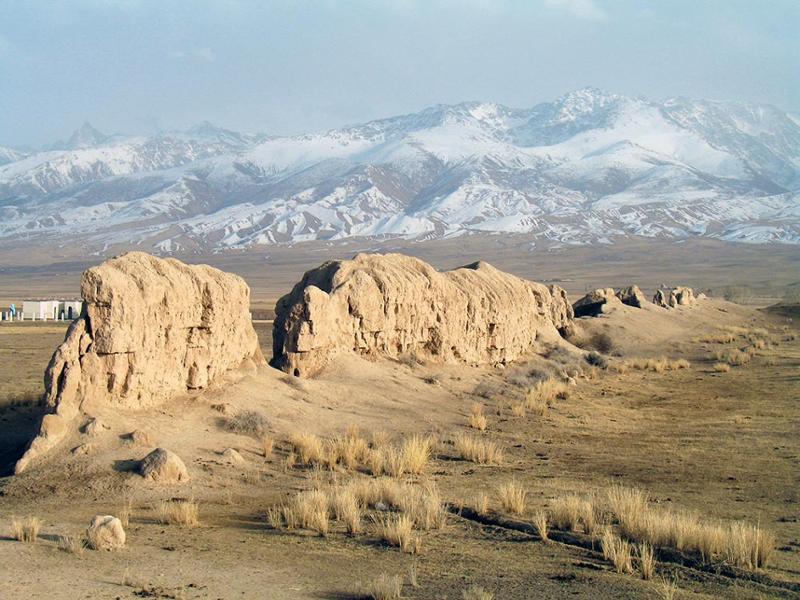 While heading to Tash Rabat in the south of Kyrgyzstan, near the village of At Bashy, stop by the ruins of the little known Koshoy Korgon fortress, which was built entirely in clay. It used to be a key site on the Silk Road, but only its foundations are left nowadays.

A local legend says that the fortress was built by the hero Koshoy, one of Manas’s followers. Koshoy used this fortress to protect his people from Chinese and Mongol invasions. You can see Koshoy on a few paintings asking help from an eagle, believed to be Manas’s soul. Koshoy was a great warrior, and he was able to protect his people for 29 years. But then, his wife fell in love with a Chinese general and during the night, she opened the gates of the fortress, resulting in a bloodbath.

The broken heart and the seven bulls of Djety-Oguz

Located at the east of the Issyk Kul Lake near the city of Karakol, the picturesque valley of Djety-Oguz (or Jeti Oguz) is a splendid destination, with its astonishing red cliffs surrounded by pine forests and snow-capped mountains. As you enter the valley, you’ll spot a huge rock shaped like a broken heart. On the other side, seven red cliffs lay one by the other. Locals have several legends to explain these strange wonders of nature.

The most popular of these legends says there was a fight between two kings, in love with the same woman. One of the Khans fell in love for the other man’s wife, he kidnapped her and loved her, but of course this created a conflict between the two tribes. The region was shattered by bloody battles. The two kings were sincerely in love with the woman, and weren’t ready to give her up.

The Khan who had kidnapped the woman then came up with a twisted plan to end this war. He would kill the beautiful woman and give her body back to her husband, hoping that this would be enough to satisfy him, without having to bear seeing his loved one in the arms of another man.

He organized a feast in the Djety-Oguz valley, for which he sacrificed seven bulls. When the last one was being killed, the king pushed a knife inside his beloved’s heart. Her blood flooded the valley and poisoned everyone who was attending the banquet, leaving behind only the seven cliffs and the heartbroken rock…

Another legend says that the seven bulls, which gave their name to the valley, came from a family dispute. An old shepherd was sick and wanted to share his seven bulls among his three sons. But the young men kept fighting and weren’t able to agree on how to share the animals. So the father got angry and hit the floor, transforming his bulls into cliffs to stop the brothers’ fight. 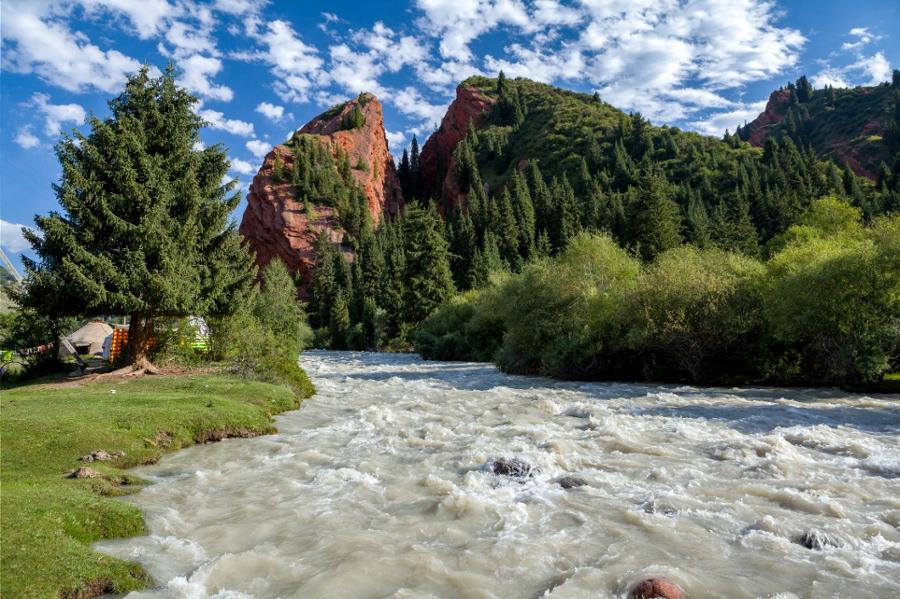 As for the broken heart, legends say it belonged to a splendid young girl named Jyldyz. Every man in the village was in love with her, but Jyldyz was a strong and independent woman. One day though, two young friends came up to the valley and both fell in love with Jyldyz, who loved them back. The two men engaged in a duel to know who would get to marry Jyldyz, but sadly, both died in the fight. Jyldyz was heartbroken and she pulled her heart from her chest, sharing it in two for each of her lovers.